How old is Earth? It’s a surprisingly tough question to answer. 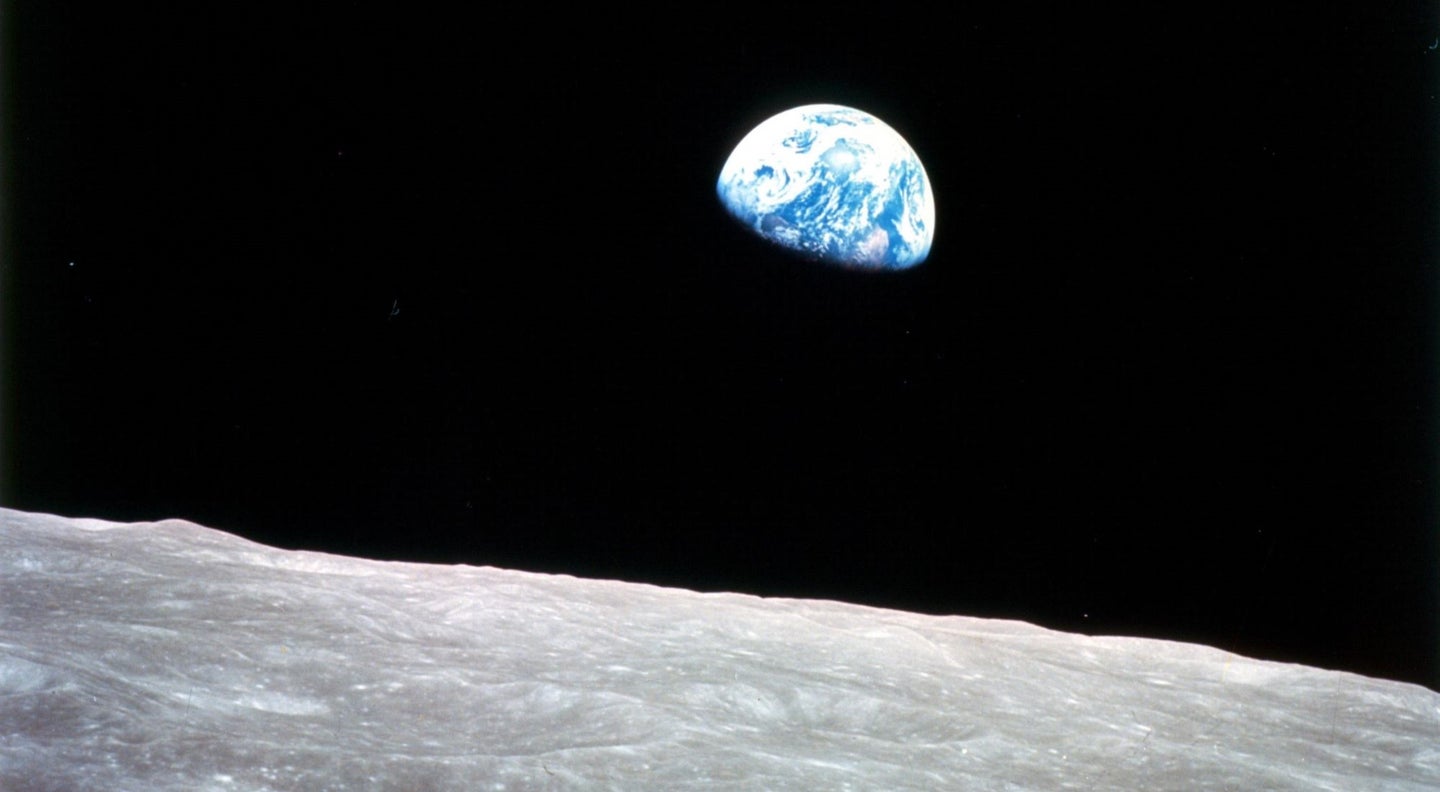 When measuring the age of Earth, seen here from Apollo 8, experts also try to date the moon. NASA

How old is Earth? It may seem like a simple question to answer. The typical ballpark estimate is that our planet is around 4.5 billion years old. But the closer planetary scientists look, the squishier that story gets. Nuances about how our planet formed could shift the age of Earth by half a billion years or so.

“An age is easy to talk about, but it becomes more and more complex as you zoom in,” says geology professor Thomas Lapen, who chairs the University of Houston’s Earth and atmospheric sciences department. As scientists have sought to determine more precise measurements of Earth’s age, they’ve had to grapple with the specifics of how our planet came to be.

“When you’re born, it’s an instant in time,” Lapen explains. But planetary formation is a process that takes millions of years. To assign an age to Earth, astrophysicists, planetary scientists, and geologists have to determine which point in the process could be considered Earth’s birth.

When was Earth “born”?

About 4.6 billion years ago, gas and dust swirled in orbit around the newly formed sun. Over the first millions of years of the solar system, particles collided and merged into asteroids and the seeds of planets. Those space rocks kept smashing into one another, some growing larger and larger, shaping the solar system as we see it today.

But planets aren’t simply big rock piles. As they amass material, these celestial bodies also differentiate into the layers of a core, mantle, and crust (at least in the case of Earth and the other terrestrial planets). Accretion and differentiation take time, likely on the order of tens of millions of years. Some might consider a point in that stage of Earth’s formation to be our planet’s birth. But Lapen says he thinks of it as Earth’s conception, and birth came later, when a cataclysmic event also formed the moon.

[Related: June 29 was Earth’s shortest day since the invention of atomic clocks]

According to the widely accepted giant impact theory, during the chaos of the early days of our solar system, the proto-Earth collided with another small body about the size of Mars. When the two slammed together, the debris coalesced into the moon in orbit around Earth.

This impact also is thought to have essentially “reset” the materials that made up the planet, Lapen says. At the time, a thick magma ocean may have covered proto-Earth. Upon the powerful collision, the material of both bodies mixed together and coalesced into the planet and moon system we know today. Evidence for such a “reset” comes from both terrestrial and lunar rocks that contain identical forms of oxygen, Lapen explains.

“Proto-Earth was, in all likelihood, destroyed or changed in composition,” Lapen says. “In my mind, the Earth wasn’t the Earth as we know it until the moon-forming event.”

If this event marked our planet’s birth, that would make Earth somewhere between 4.4 billion and 4.52 billion years old. But determining a more specific age for our planet requires sifting through ancient evidence.

Assigning a number to our planet’s age

Like detectives searching for clues of an old crime, planetary scientists have to look at the evidence that remains today when piecing together our planet’s early history. But with all the turmoil during that chapter—the roiling magma ocean and intense geological turnover—the proof can be hard to find.

One way to constrain the age of Earth is to search for the oldest rocks on the planet, Lapen explains, which formed right after the magma ocean hardened into a solid surface. For that date, scientists look to zircons discovered in the Jack Hills in Western Australia—the oldest known minerals.

To determine the age of these crystals, a team of scientists used a technique called radiometric dating, which measures the uranium they contain. Because this radioactive element decays into lead at a known rate, scientists can calculate a mineral’s age based on the ratio of uranium to lead in the sample. This method revealed the zircons are approximately 4.4 billion years old.

These rocks suggest that the Earth-moon system must have formed sometime before 4.4 billion years ago, because the rock record “would be obliterated by the moon-forming event,” Lapen says. So the planet is no younger than 4.4 billion years old. But how much older could it be? To answer that, Lapen says, scientists turn elsewhere—including the moon.

[Related: Here’s how life on Earth might have formed out of thin air and water]

Rocks on the Earth’s satellite body are better preserved than the ones here, because the moon does not undergo processes like plate tectonics that would melt and reshuffle its surface. There are two main sources for these clues: in lunar meteorites that fall to Earth and in the samples collected directly from the moon during NASA’s Apollo program.

Like proto-Earth, the young moon was also covered in a magma ocean. The oldest rocks taken from the lunar surface can indicate when the moon’s crust formed. Scientists have conducted radiometric dating on zircon fragments collected during the Apollo 14 mission, correcting the calculations for cosmic ray exposure, and determined that the lunar crust hardened approximately 4.51 billion years ago.

There would have been a period of time between the collision and the bodies coalescing, cooling, and differentiating, Lapen says, so this date has a window of uncertainty, too, of about 50 million years.

“Dating the exact event is very challenging,” he says. Lapen estimates the Earth-moon system likely formed between 4.51 billion and 4.52 billion years ago, but some scientists say calculations could be as many as 50 million years off.

Another way to constrain that window of time is to look at rocks that existed when the proto-Earth was forming. When the planets solidified from the debris around the young sun, not all of the material coalesced into the worlds and their moons we see today. Some remained preserved in asteroids or comets.

Sometimes those solar system time capsules come to us as meteorites that fall to our planet’s surface. The oldest known such space rock, Lapen says, is the meteorite Erg Chech 002. It is thought to be a fragment of an igneous crust of a primitive protoplanet from the early solar system. As such, dating the Erg Chech 002 meteorite provides a snapshot of a time when the proto-Earth was likely at a similar stage in its conception.

“If the ‘birth of the Earth’ is defined as the formation time of the first proto-Earth nucleus or protoplanet that ultimately grew through accretion to form the present-day Earth,” Lapen says, “then perhaps that was as long ago as the age of [Erg Chech 002].” Scientists calculated this chunk of igneous crust crystallized approximately 4.565 billion years ago.

Can Earth’s age be refined?

On human timescales, an uncertainty of 50 million years around when the Earth-moon system formed sounds vast and imprecise. But on planetary timescales, particularly billions of years ago, “it’s a good estimate,” Lapen says.

“The further back we look, oftentimes the less precise things are because of the gaps in the record. It’s a relatively short period of time, where a lot of things were happening—there was the impact, everything had to coalesce, and cool, and differentiate into sturdy rocky bodies that have a core, mantle, and crust,” he says.

However, scientists aren’t done. There is always the opportunity to get more precise and accurate measurements of Earth’s age, Lapen says, particularly as researchers obtain additional samples from the moon, meteorites, and asteroids.

Rocks acquired by China’s Chang’e 5 mission to the moon are still being studied, for example. NASA’s Artemis program also plans to collect lunar rocks. And the NASA curation team is also making more materials available for study from the Apollo program, which offers researchers an opportunity to study old moon rocks with new technologies, Lapen adds.

If these new endeavors reveal lunar samples from parts of the moon’s surface that crystallized earlier than previously studied, he says, that could further constrain time estimates for when Earth and the moon were born.

The post How old is Earth? It’s a surprisingly tough question to answer. appeared first on Popular Science.